The 4th Turning by Strauss and Howe is the best book I’ve read in recent time. Using a combination of demographics, economics and sociology, the authors analyse American history through generations. Rather than the orthodox approach, looking at history through the eye of the leaders, they pinpoint the influence of key events on each generation. The key insight is that society, led by America at the moment, tends to experience 80-100 year cycles broken into 4 seasons of 20-25 years with defining events along the path. Societal cycles are intertwined with the human lifecycles; childhood, adulthood, midlife and old-age, which roughly equate to 20-25 year phases. The 80-100 year cycles repeat with stereotypical generational cycles flowing through each. The specific recorded events are different but there are similarities between each turning. First, there are the post-crisis recoveries like the 1950s where the mood is upbeat and civic order is strong. Second, there is consciousness revolution like the 60s & 70s with Vietnam and Woodstock which is a passionate era of spiritual revival. Thereafter the culture wars of the pre-crisis autumn time like the 1980/1990s with growing individualism and weakening institutions. Fourth, the crisis-era of secular upheaval sees the replacement of civic order and values like the American Revolution and WW2. To Mark Twain’s quote, “history never repeats but it rhymes.”

As an example of how generations are influenced by a specific event, children experienced a sheltered and conservative upbringing during WW2. Post-war, the Silent Generation, as they are called, had impressive expectations laid on their shoulders, which they would never meet. Society invested its hopes and dreams in this untarnished generation but sheltered it from real challenges. Expectations, combined with a lack of experimentation, led to frustration and rebelliousness during adulthood, which contributed towards Summer-Loving culture of the 60s and 70s. By contrast, men who returned from WW2, after achieving victory for the free world were confident that their collective action could achieve whatever they set their minds to. They were the powerful GI Generation who built grand American institutions in the 40s, 50s and 60s but struggled with the spiritual questions and nuance required during the awakening in the late 60s and 70s.

At times the book takes on a mystically characteristic with its broad-brushstroke assessments, overly simplistic groupings, historical references and prophecies, which could put off those who’d prefer to stick to facts and figures. The big picture approach implies that the analysis doesn’t lend itself towards precise predictions. Obviously, each person in a generation has individual characteristics. But this approach an incredibly useful way to look at history and think about the future. It’s a guidepost – a way to relate current conditions to historical reference points. It’s a particularly valuable framework to assess the world we live in as we enter a crisis. Not just the corona pandemic! Global debt levels are at their highest since WW2 and interest rates at their lowest, which shows that the world is headed for some measure of socioeconomic crisis. Crises don’t happen overnight. They are a build-up of 80-100 years of cultural, social and economic conditions. But there are certain events that mark the path and trigger the next stage. The Covid19 pandemic is seemingly a noteworthy event along the path. Here are the key characteristics of the crisis era. 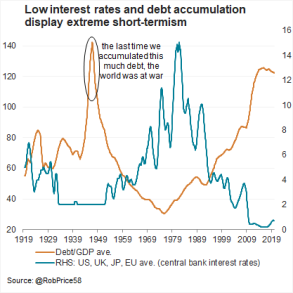 Experience tells us that the crisis-era usually begins with a catalyst, a startling event that produces a sudden shift in mood. Once catalysed society achieves a regeneracy, that reunifies and re-energises civic life. The regeneration propels towards a climax that confirms the death of the old-world order and birth of the new. The climax culminates in a resolution, a triumphant or tragic conclusion that separates winners from losers, resolves big questions and establishes a new order. Reflecting on current conditions, society doesn’t appear to have reached a resolution. Was 2008 the catalyst? But was there enough regeneracy in the subsequent years to call ’08 the catalyst? I don’t think so. Perhaps the 2020 crisis is the true catalyst? It certainly appears to be capable of generating a profound psychological impact on society grapples with the shift from complacency to overreaction, oscillates between fear and boredom, and have time at home to consider their underlying values, relationships and goals. Or perhaps 2020 is the climax, but that implies that we’re close to a resolution… We’ll only know the answers to these questions in hindsight, but they contextualise and provide an analysis framework. I’m leaning towards viewing the corona pandemic as a catalyst.

Experience tells us that people stop tolerating weakening institutions during a crisis, the splintering of culture and the individualising of behaviour. Spiritual curiosity abates, manners traditionalise and culture is harnessed by propaganda to achieve good conduct. Collective action is now seen as vital to solve societies fundamental problems. I can easily see how values and culture traditionalise from here. Culture became increasingly disparate and niche over recent years. Obviously, there are positives and negatives to this trend, but this isn’t value judgement, its just an assessment. During crisis, with social and economic fear, there won’t be as much time and energy allocated to cultural and social niches. By contrast, sound values and morals, undervalued in recent years, could see a resurgence.

Instead of downplaying problems, leaders begin to exaggerate them during crises, and instead of delaying solutions, they accelerate towards them. Instead of tolerating diversity, society demands consensus. The public has a surprising willingness to let leaders lead and find solutions during crises, in spite of poor decisions and errors. We’re already seeing this across the globe during the coronavirus pandemic as individuals voluntarily handover freedoms to governments that are characterised by decaying political legitimacy. Many will abuse this power.

In the years ahead there could be a jarring realisation that society has become helplessly dependent on an edifice of anonymous transactions and paper guarantees. People might start to ask where their savings are, who their employer is, what their pension is and how their government works? The US government is so fiscally over-committed and interest rates already so low, that the official response to this crisis lacks credibility despite some of the biggest promises on record. People won’t get as much from social security at exactly the time that they need it and deeply underfunded state pensions may have to face up to reality. The social contract that binds societies together will come under pressure as a result and a new contract may need to emerge. 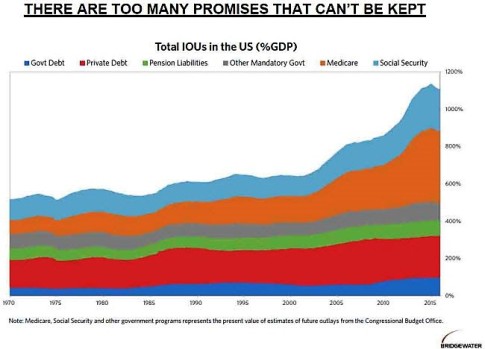 Historically, a national election tends to achieve sweeping political alignment during a crisis. One of the political parties capitalises on the desire for decisive political action wining the partisan tug of war. The new leadership tends to assert public authority and demand private sacrifice. Where leaders have historically been inclined to alleviate societal pressures, they will now aggravate them to command societal action. America’s 2020 elections could be a defining moment in its history! Increasingly divisive politics, an economic recession, massive unfunded liabilities, a reality TV star as President and a global pandemic. After a draconian virus clampdown in early 2020, it took China about 3 months to start reopening after the coronavirus. America didn’t clampdown as quickly and that probably means that the crisis will linger for at least twice as long. Society could still be social distancing in November 2020 – what kinds of curveballs could this election present?

Looking at the generations, the indulged children of the American High, born in the aftermath of one crisis, the Baby Boomers remain the largest and richest generation in American history. Financial market volatility will pressure their finances after years of economic and financial prosperity. After dominating social trends for 80-100 years, they will remove their influence from society by the end of the crisis. 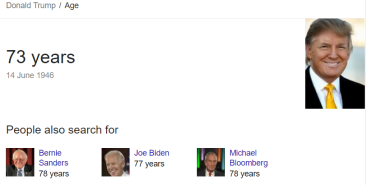 By virtue of their age, these are not the leaders of the future, but they’re going to steer America’s future during a period of secular revival. It’s not unusual for old warriors to maintain their influence through America’s crisis-era but if they crusade or overstay their welcome, they’ll quickly be pushed aside. Has Trump overstayed his welcome? Will the short-term focus of these old men, push America deeper into crisis or will they be able to consider the long-term future and positively influence society over the next 4 years? Either way, the 2024 election demographics will look very different to 2020. So perhaps 2024 will achieve political alignment, not 2020?

The Millennial generation, born in the late 1980s, 1990s and early 2000s, are characterised historically by the Greek archetype as Hero’s. Pop culture tends to become blonder and friendlier through crises. Celebrities are seen as good role models for children. This may seem out of place if one considers the celebrities over the 2010-2020 period, but perhaps the new role models will emerge in the coming quarters? Voter turnout will rise as society becomes more politically engaged, but Millennials could provide support to dangerous demagogues as they search for civic cohesiveness. After being protected in childhood, this generation tends to become the young adult soldiers of the crisis, challenging political failure. They have a strong sense of constructive activity, dutiful conduct and generational community. They expect and receive challenges from older generations. The crisis will release generational tensions and allow for a clear transfer of power. When they encounter leaders who cling to the old regime and the associated policies, Millennials will not tune out like many have before, they will overcome their adversaries. Their heroic sacrifices will add to national resolve. There’s a lot up for grabs for the Millennial generation and there’s plenty to contemplate for those of us in our 20s and 30s.

To prepare, it makes sense to 1) participate in seasonal activities by taking advantage of current positioning, 2) avoid post-seasonal behaviour by terminating habits that were appropriate for the past cycle, and 3) make pre-seasonal preparations by trying to anticipate the needs and opportunities of the next turning. Given we’re in the midst of this crisis, its difficult to conduct new economic preparations, but fiscal conservatism will probably pay dividends on an individual level until the new optimism of the spring era arises. Governments are over-indebted and will renege on promises so we should not rely on them. Governments are trying to prevent the economic fallout from the 2020 recession but they won’t be successful. There’s just too much deadwood in the system and they’re got far too little ammunition left in interest rates or debt. A quick economic recovery seems incredibly unrealistic when considering the secular debt, interest rate and cultural trends. A shift from cultural individualism towards a more cohesive civic culture would be a remarked and surprising change. It’s seemingly underway in 2020 as people choose to take hygienic actions in order to protect the safety of the elderly, even if the virus is of less risk to them individually. Lastly, the 4th Turning and the prophecies of the crisis is both a word of caution but also an optimistic tale. The crisis will be characterised by desperation, depression and upheaval but it will eventually pass. It will give birth to a new more sustainable cycle that will influence the next 100 years. It’s our responsibility to foster the cultures, values and policies that will generate a successful long-term future. It’s through long-term commitment to real value that we’ll find positivity, optimism and prosperity.