There is immense value in the broader crypto ecosystem of decentralised financial technologies but the bright shiny lights of the fastest appreciating token also pose a risk. Desire to beat the market can distract us. Bitcoin remains the most important asset in the ecosystem because of its resilience to external attack. Bitcoin is a reserve asset that creates a robust decentralised foundation at the centre of a new digital economy. The rest of crypto is reliant on bitcoin, but a dogmatic bitcoin-only belief is also unhelpful. There is a symbiotic relationship between the core and periphery where innovation takes place at the edges and BTC trudges on boringly at the centre.

I recently read Nik Bhatia’s excellent new book Layered Money. He provides a concise monetary history to press home his core insights. Financial systems usually pyramid layers of money on top of a stable foundation. I agree with his thesis that bitcoin will become the foundation of a future financial system and use this as an important framework in my analysis of price action and risk.

Whether it be caused by USD currency reserves, USD-denominated global trade, USD-dominated global debt markets or just the fact that the US is the world’s largest economy and financial market, almost all financial instruments are leveraged to the US dollar. They are layers built on top of the foundation of the US dollar.

If US Treasuries and the US dollar increase in value, it reins in central banks globally. Capital is attracted towards the dollar, foreign currencies weaken, inflation rises in those countries, interest rates increase, economic growth expectations are pressured, etc. Investors, businesses, and households feel the ripple effects filter through over time. The converse is also true; a decrease in the value of the US dollar and more abundant US Treasuries loosens the reins on the global financial system, allowing central banks, governments, corporates and households globally to expand and leverage. 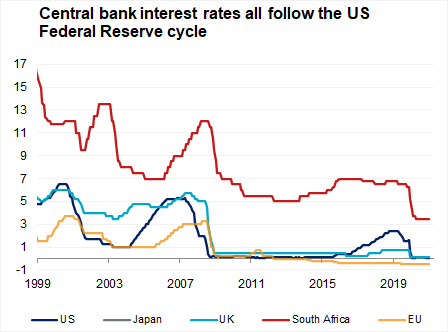 I am not saying that there are no country/company/industry-specific drivers, I am just arguing that the dollars’ influence is more powerful than you care to notice. If you pull back the lens, the relationships are obvious. Global interest rates move in lockstep with US interest rates. US dollar cycles are correlated with economic growth, risk appetite, equities, commodities and Emerging Markets. 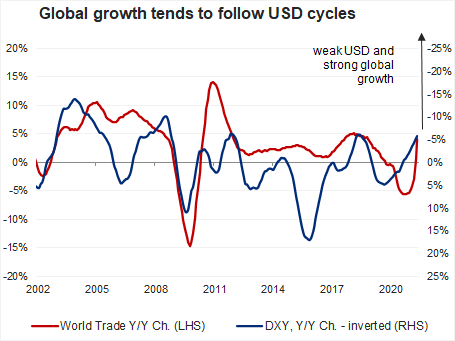 Bitcoiners argue that bitcoin will become the foundational layer of a new financial system because bitcoin is a superior technology to dollars and gold. The world has never had a scarce, digital, bearer asset with enough liquidity to transfer and settle billions of dollars in under an hour. This is a remarkable feat and clearly the future is bright for this technology.

The transition towards the outcome is uncertain, but the probability of this transition is elevated; as evidenced by bitcoin’s extraordinary increase in market capitalization since 2009.

Bitcoin is already the reserve asset of crypto

It will take time before bitcoin becomes the centre of the global financial system, but it already functions as a reserve asset in the crypto ecosystem. Bitcoin’s adoption cycles drive the rest of the market. Crypto bull-markets take place when bitcoin is in a bull market. Initially, capital floods into bitcoin as the lowest risk allocation with the clearest investment thesis. Then capital slowly leaks out from bitcoin into the rest of the ecosystem as investors seek out higher returns and additional ‘use-cases’. During these latter stages of the cycle investors tend to overlook the importance of a sound financial foundation, bitcoin.

Oversimplifying, I like to think about crypto as leveraged bitcoin. This does NOT imply that there is no other value in the ecosystem, but I do not think that anything will usurp bitcoin’s role as the foundational layer of the digital financial system. Nothing is as sound, stable, secure, decentralized and resilient to attack as bitcoin. These qualities have their drawbacks, on transaction fees and programmability, for example, so other cryptos may dominate other realms and use-cases. For example, stablecoins are built on Ethereum, not bitcoin. Stablecoins are very useful and enhance bitcoin adoption, which is something I have written about HERE and HERE.

But as a financial system foundation, the reserve asset, nothing rivals bitcoin.

There is immense value in the broader crypto ecosystem of decentralised financial technologies but the bright shiny lights of the fastest appreciating token pose a major risk. Human greed and a desire to beat the market can distract us. Bitcoin remains the most important asset in the ecosystem because of its resilience to external attack. I am still largely focused on bitcoin, the bitcoin cycle and the interactions with trad-fi and crypto. I allocate risk with bitcoin at the centre. Bitcoin is my reserve asset.

I still recommend that new people focus on understanding bitcoin. It is the key innovation, it is what the world needs and the return potential is high, mentally, socially and financially. It is dangerous to allow the price increases on projects at the periphery to distract oneself from the economic, social and financial potential of bitcoin.

2) Symbiotic relationship between crypto and bitcoin

Despite my bitcoin focus, I am digesting and reflecting on my risk allocation. I have been quite conservative historically, not fully appreciating the value throughout the ecosystem. Thinking more about stablecoins has made me realize that there is a symbiotic relationship between the core and periphery where innovation takes place at the edges and BTC trudges on boringly at the centre.

I am not a venture capital or small cap type investor who would traditionally flock towards the start-up projects so prevalent in crypto. So while I am reflecting on my risk budget allocation historically, I am not surprised or too disappointed by the decision. I am not I may increase my risk budget as I gain greater strength in my understanding of the interactions between the bitcoin cycle and crypto.

When bitcoin dominance falls too far, too fast, then the whole ecosystem becomes shaky. May 2021 provides a clear example. Just as I was thinking about the rising chance of some sort of decoupling in the crypto ecosystem, bitcoin’s powerful foundational role reared its head. After a strong start to 2021, bitcoin flattened out in March and April. Exuberance quickly filtered out into other projects, looking for more lucrative sources of return. Eventually, exuberance filtered out into doge and dog-themed coins. When the use-cases grow too quickly without a strong foundation, then the market is frothy, unstable, and due for a correction to reality.

4) Volatility on the path to stability

Bitcoin looks volatile from the outside but the foundation is substantially more stable than our existing financial system. Bitcoin’s supply growth is pre-determined whereas existing monetary policy is determined by a deluge of mathematical models, a bunch of university economists, and the pressure placed on them by politicians. Their decisions are haphazard, usually following the path of least resistance with no care for the long-term consequences of their actions. There is certainly no foundational value on which our monies are based.

Observers who focus on bitcoin price volatility alone miss the forest for the trees. Bitcoin provides an unwavering foundation on which to base a financial system. Constrained supply implies that it holds value over time and the predetermined supply schedule implies we do not waste any energy second guessing future policy changes. Once bitcoin is widely adopted, price volatility will likely decline, and greater economic stability can ensue. But monetization is a volatile process, so we must buckle up while people grabble with this technology.

There are all sorts of crypto applications that have extraordinarily little to do with bitcoin that should be priced entirely based on their own fundamentals. When bitcoin is fully monetized, I think a full decoupling will take place between crypto assets and bitcoin. But until bitcoin becomes a more dominant monetary medium, it will probably continue to hold the reins on crypto capital flows. Correlations between bitcoin and crypto assets will oscillate and there will be times when it looks like a full decoupling has taken place, but until bitcoin adoption has stabilized, I expect the correlations to bitcoin to reassert themselves. Just like they did in May 2021.

Just as the earth revolves around the sun, the global financial system revolves around the US dollar and US Treasuries (for now). We can get caught up in the minutiae here on earth, but at the end of the day the seasons are determined elsewhere. Luckily for us, earth’s orbit around the sun is consistent so we do not have to guess when summer will arrive. The dollar is less consistent, so we must consistently ask ourselves, “when is winter coming?” Bitcoin provides an opportunity to generate a consistent centre for a new financial system. It is easy to forget the importance of the financial system’s layered structure. It is also easy to dismiss bitcoin’s role as the center of the new digital asset ecosystem. Thankfully, writers like Nik Bhatia provide an unideological context. I highly recommend reading Layered Money to understand this framework better.

*Thanks to Claudia Sotomayor for her feedback on this article

Processing…
Success! You're on the list.
Whoops! There was an error and we couldn't process your subscription. Please reload the page and try again.